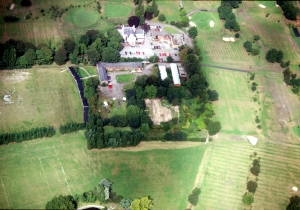 Timperley Old Hall moat excavations during the 1990s. The site can be seen sourrounded by trees in the centre of the photograph with the later 18th century hall to the north (top).

This year’s annual Festival of British Archaeology is nearly upon us. Running from 14 July to 29 July, and coordinated by the Council for British Archaeology, this is a chance to celebrate some of the best sites, organisations and finds in British archaeology, through more than 750 dedicated events including behind the scenes tours, walks, and digs. Most of these events have been organised by some of the 2,030 archaeology and history groups that can be found across the UK, representing more than 215,000 voluntary members interested in spending some of their spare time on heritage projects.1 The scale of this voluntary membership demonstrates how the enthusiasm and dedication of archaeological volunteers can have a tremendous impact on their local community and their immediate landscape.

A good example of this is the work of the South Trafford Archaeology Group (known affectionately as STAG). Founded in 1979 and with a membership of around 100 they have worked on archaeological sites and buildings across eastern Cheshire and Greater Manchester. The group has led the landscape survey of the rural township of Warburton, discovering new timber-buildings and the medieval origins of the village. They have rediscovered and excavated a Middle Bronze Age barrow at Fairey Brow in Little Bollington, assisted the National Trust in the survey of the Apprentice House at Quarry Bank Mill and with the help of students from the University of Manchester investigated the extra-mural settlement at Roman Northwich. They have built their own headquarters building which is a regular venue not only for their own events but also for extra-mural classes by the Workers’ Education Association, CBA North West and the Centre for Applied Archaeology at the University of Salford. All of this and more can be chartered through their website, regular newsletter and occasional publications. Like many other archaeology and local heritage groups they are a dedicated group of enthusiasts with specialist knowledge of their own area, led for many years by the original founders of the society, which includes the present Chairman, Derek Pierce.

This is perhaps best seen in their excavations of the medieval moated site of Timperley Old Hall, now part of Altrincham golf course in Trafford. This project has run, since 1989, in two phases. The first series of excavations, from 1989 to 1999, explored the moated platform. It revealed not only the medieval timber hall and its Tudor rebuild in stone, but also an intact timber-lined medieval well, and beneath the hall the remains of late Saxon activity in the form of a fence-line and hearth. The origins of the site were taken back even further with the discovery of a scatter of late Neolithic and Early Bronze Age flints deposited at a time when the southern arm of moat was part of the meandering course of Timperley Brook. This now runs several hundred meters to the south of the moated site. These investigations were covered in a publication in 1999.2

The second phase, running between 2008 and 2012, was funded with a Heritage Lottery grant was designed to turn the moated site into a public amenity. A further set of excavations between 2009 and 2011 discovered the western wing of the Tudor and Stuart hall, and excavated a large rubbish dump from the western arm of the moat which included large amounts of medieval roof tiles, and a regionally important grouping of 16th and 17th century domestic pottery. The site was then landscape by STAG during 2011 and 2012, with the help of Trafford MBC. This final part of the project has seen the restoration of the 19th century kitchen garden wall surrounding the moat platform, the building a new footbridge into the site, the laying out of the footprint of the hall buildings, the creation of a herb and phyisck garden within those walls, and the installation of information boards about the archaeology and history of the site. This was celebrated at a grand opening by the Mayoress of Trafford and the local MP on 25 May when the society handed the site back to the council as a fully functioning local amenity.

STAG’s many achievements over the last 33 years have been recognised by the inclusion of some of their most important discoveries (at Fairey Brow, Roman Northwich, Timperley Old Hall and Warburton) as part of the North West Regional Research Framework volume ‘The Archaeology of North West England’,3 published in 2006. Yet the restoration of the medieval moated platform at Timperley will have the greatest impact on their local community.

So why not visit STAG’s own display centre and the adjacent Timperley Old Hall gardens during the Festival of British Archaeology, and enjoy the positive impact that archaeology and heritage can have on the local community and landscape. Better still, why not join STAG and help to further uncover and preserve Trafford’s archaeology with them?