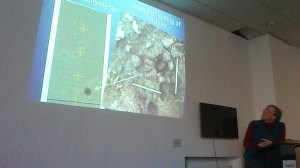 There are many ways of disseminating the thousands of pieces of archaeological work undertaken in Britain each year. One popular and well established route is through a day conference. In North West England there are many of these, from the two annual conferences run by CBA North West since the 1970s and the Cheshire Archaeology Day which has been running since the 1990s, to local society day schools. I am involved with several these including the fourth Greater Manchester Archaeology Day, held on Saturday 29th November 2014.

A hundred people were packed into the Fire Station seminar room at Salford University to hear nine talks ranging from excavations on the Roman fort at Castleshaw to updates on the third year of the Dig Greater Manchester community archaeology project. The morning programme had four talks. Rachael Reader of CfAA at Salford University reviewed the excavations at New Bailey Prison in Salford. This has been funded by English Cities Fund as part of the redevelopment of central Salford. The prison was built in 1787 and closed in 1868, to be replaced by a railway goods yard. The design was that of a hub and spoke plan that was later expanded with a large crescent wing full of workshops in the 1820s and was the largest prison in Britain in 1832. . The prison was jail briefly to Henry Hunt, the famous orator at the Peterloo Massacre in 1819 and to the Manchester Martyrs. Substantial, well-built, foundations were located relating to the cells, exercise yards and part of the chapel. Six large wooden bases were also located which appear to date from the railway sidings and were for cranes. Further work is planned for 2015.

Norman Redhead of the Greater Manchester Archaeological Advisory Service, based at the University of Salford, talked about the latest project to explore the Roman auxiliary fort at Castleshaw. This was run by the Friends of Castleshaw Roman Fort with funding from the HLF and Saddleworth and Lees District Grant. The site comprises an auxiliary fort of the AD 70s, a fortlet of the AD 120s and a small vicus. The site has been studied several times in the 20th century, and in the 1980s four phases of activity were identified. The new project is looking at the hinterland of the fort, to understand better the development of the fort and to display it more fittingly, like the fortlet was in the 1980s. Four trenches dug in 2014 on site of previous digs including the eastern gateway. Predictably complex new archaeology was found including hints of the primary timber fort and evidence for activity after the fort was demolished. One spectacular feature was the eastern gateway and a 26m length of roadway running away from the fort which had a spur road and possibly an extramural building.

The third presentation of the morning was by Charlotte Matthews of Pre-Construct Archaeology, talking about her work during the rebuilding of Exchange Station in Salford. This is one of the lost station sites of the region, built in the 1870s as an extension of Victoria Station by the London & North Western Railway Company to designs by Francis Stephenson. The site sits on a set of viaducts but was rebuilt in the 1890s, bombed in the Manchester Blitz of December 1940 and the partially rebuilt station was closed in 1969. The pedestrian footbridge survived but all other station buildings above the viaducts have gone. However, remains of the station kitchens survived in the arches, including the scullery and wine cellar complete with wine bins. These serviced the refreshment rooms at platform level. There was also a sub-basement. Below these were fragmentary remains of early 19th century workers’ housing and a well.

The final talk of the morning was about the problems of undertaking geophysical work in an upland area. Kevin Wright of the Tameside Archaeology Society discussed how the society have been helping other local groups with their research as well as some problems of interpretation. This included work at the Castleshaw forts showing fort and vicus features, and survey work on parkland features in Cheetham Park in Stalybridge.

A varied morning demonstrating the range and types of archaeological work being undertaken by professionals and volunteers across Greater Manchester.