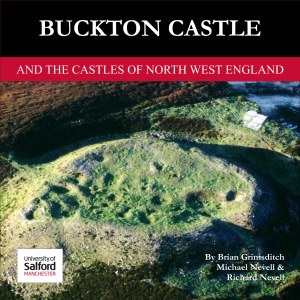 The last volume of the Archaeology of Tameside series (volume 9), published in 2012.

2015 marks the 25th anniversary of the start of the Tameside Archaeology Survey. Funded by Tameside MBC, one of the ten districts of Greater Manchester, it had three main aims: primary research, community engagement, and dissemination. Tameside as a local authority was only created in 1974 and this project was seen by the council as one way in which the new borough’s identity could be promoted through the exploration of its river valley, mossland and upland landscapes (see my blog from February 2014 for a fuller description of the project). During its 22 years it won a clutch of awards from the Libraries Association and the Association for Industrial Archaeology and was highly commended in the 2014 ‘best project’ category of the British Archaeology Awards.

The main survey finished in 2012 with the publication of the ninth volume in the Archaeology of Tameside series, and the ending of the ten-year long Setantii exhibition based on the project and housed in Ashton-under-Lyne town hall. The basement had been specially converted so as to tell the story of Tameside through its archaeology with dedicated displays and audio-visual material. And the name of the exhibition? That refers to a tribal group that occupied the Lancashire area during the Roman period: Tameside straddles the historic Lancashire and Cheshire county border.

Spin offs from the archaeological survey have continued, not least the objects on display at the Portland Basin Museum and the continued work of the Tameside Archaeology Society (who are just starting a prehistoric survey of the boar Flat, one of the high Pennine upland areas of the borough) and the Tameside History Forum. So it seems appropriate to celebrate the survey’s quarter century with a look at 25 objects uncovered, or rediscovered, by the project since 1990. This is my 50th blog so starting the series marks another milestone in a new form of media that we could not have foreseen back in 1990 when the Tamesidee Archaeology Survey started.

With such a long-running and a rich archaeology to choose from the problem is keeping he list to just 25. I had the privilege to run the project for its 22 years, and to oversee the results so there is a wealth of material to discuss. Over 625,000 words in 18 academic and popular monographs; 110 detailed building surveys; 24 research excavations; a range of journal articles; and six national awards. Academically, the fieldwork has had a major impact on the practice and development of Industrial Archaeology, through the excavation of one of the earliest Newcomen steam engine sites in the world (Fairbottom Bobs); pioneering studies on the canal warehouses and felt hatting industry remains in the borough; and the development of the Manchester Methodology.

Whilst it’s tempting to approach this project thematically (death and burial, identity, work life, home life, landscape change), I’m going to take a more straight forward chronological approach. In this way the blogs should reflect the dominance of the industrial archaeology of the borough, and the role Tameside played in the industrialisation of Britain, which turned out to be the major impact of the project on British archaeology. First, though, we need to lay some foundations, so the first five items will cover the later prehistoric and Roman periods.