Front cover of the landscape archaeology book on Warburton launched in June 2015.

On Saturday 6th June several dozen people gathered to hear a set of talks on the history of Warburton in the local parish rooms as part of the Warburton History Day. Amongst the events was the launch of a book on the archaeology and history of the landscape of Warburton, the culmination of seven years of writing and 20 years of research.

Warburton is a historic township that lies on the border of East Cheshire and Trafford, Greater Manchester, in North West England. Today it is best known for the busy toll-bridge that crosses the now dry river bed of the Mersey, and its two parish churches. Yet the rural township hides a rich landscape history with origins in the late prehistoric and Roman periods. The roots of the book partly lay in my fascination with this landscape. As a boy I remember my parents driving out at a weekend to buy eggs and potatoes from the old corn mill, and I even cycled around the township in the summer holidays. As a raw young professional archaeologist I was shown around the medieval timber church on a wet December afternoon in 1988, the graveyard at the time being studied by GMAU. In the early 1990s I was drawn back to the township as an increasing number of farmhouses were converted into private dwellings. These required recording and studying as part of the planning process, a job I was happy to be involved with through UMAU. I came to realise, as others had done before me, that the Warburton landscape was special (it had been in the hands of one family for nearly 700 years, the Warburton-Egertons, until 1918 and there was a wealth of documentary material available) and that it kept its secrets close: a Tudor wall painting had only recently been rediscovered in one of the farmhouses, whilst every time I recorded a building yet another previously unknown timber structure would emerge. Thus, when the Department of Archaeology at the University of Manchester was looking for a new undergraduate training project in 1995 and I was in need of a lowland piece of rural landscape to compare with the Tameside material I was working on, Warburton sprang to mind immediately.

The result was the Warburton Archaeological Survey project. This landscape project was designed to partner the Tameside Archaeological Survey, as an example of a rural community little touched by industrialisation – or so I naively thought. The aims were threefold: to study the archaeology of the church; to record the archaeology of the local buildings; and to examine the impact of humans on the landscape, especially in the last 1000 years. This was to be done in partnership with the local archaeology society, the South Trafford Archaeology Group (STAG), and with the local village community. Over 30 test pits were dug in front and back gardens: several hundred acres of fields walked, mossland remains sampled, the church recorded and dendro-dated, and over 50 buildings surveyed (sometimes during the winter when the snow would blow through the ruined roof of the building being studied – thankgoodness for Derek Pierce’s cheese and marmalade sandwiches and hot sweet coffee). Even Channel 4’s Time Team was invited in to help after metal detecting revealed a cluster of Roman finds (broaches, coins and a silver arm bracelet now on display at Manchester Museum). I though the project might last five years, perhaps ten if we included the publication of the material. 20 years later new material is still being gathered: the work on the church and the landscape was finished in the first decade but opportunities still arise to look at the buildings with the help of the local group.

Although I moved to Salford University in 2009 Warburton would not go away. In the autumn of 2008 and the spring of 2009 I led a series of adult education courses for the Altrincham branch of the Workers Educational Association (WEA) on the archaeology and history of Warburton. The origin of the current book lies in that course when several members of the class decided to explore further the township’s history. This built upon archaeological and documentary work already undertaken. The team members for the book were Marjorie Carney, Jenny Cracknell, Jim Haworth, Chris Hill and Denise Jubb. I don’t think we realised it would take seven years to complete the book (over 30,000 words long), and that we would have to leave so much out. The volume has chapters on the development of the landscape and village, the latter starting as a linear arrangement of late medieval farmsteads that coalesced around a village green in the 16th century; the archaeology and history of the old church (one of only 29 surviving medieval timber churches and chapels in England and Wales); the buildings of the area which include a dozen cruck-framed structures – one of the highest concentrations in the southern part of the North West; and a study of the people of the parish from 1600 to 1900 using the manorial, parish, and probate documents. Together this information provides a detailed record of a rural community on the edge of the great industrial and social changes of the post-medieval period. 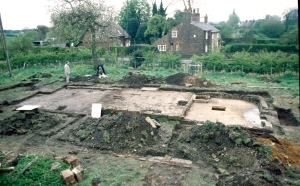 Excavations at Onion Farm Cottage, a cruck-framed timber house at Moss Brow, in 1999.

The rich archaeological and historical landscape of Warburton is currently threatened by 21st century development in the form of the proposed high-speed railway line from Birmingham to Manchester. A feeder line is projected to cut across this rural township from north to south, potentialy altering its character permanently. Such threats to the landscape of Warburton are not new. One hundred years ago in 1912 Geoffrey Egerton-Warburton observed that: ‘Although much of the neighbourhood has become semi-urban and any idea of rural seclusion is destroyed, at least in summer, by the crowds that find their way to it from Manchester and the other large towns, yet the Cheshire village of Warburton … is a real country place still. Howe [sic] long it will remain so is another thing. One salt works has been set up at Heatley about a mile away and we are now (1912) promised another, while there is every prospect of land being let for works in Warburton itself. Who knows, in a few years perhaps the whole place may be reduced to the desolation of another Widnes. Then, when it has become a rare thing to find even a blade of grass on the dreary black waste or to see any bird but a grimy sparrow, a record of what was once here may be a strange reading’ (Egerton-Warburton, G., In a Cheshire Garden: Natural History Notes. London & Manchester: Sherratt & Hughes, 1912). This apocalyptic vision of the future of Warburton did not come about in the 20th century. Whether the 21st century will be different remains to be seen but I suspect that my association with Warburton is not yet finished.