The Roman cavalry tombstone discovered by archaeologists in Lancaster during planning-led mitigation works. Finds such as this will be lost, or worse if Lancashire CC close the HER and their archaeological planning advisory service

Earlier this week, on the 6th January, Lancashire County Council opened a public consultation on the future of each of its museums. This is inline with a response received in my role as CBA North West Chair just before Christmas to a letter I wrote in November 2015. That response failed to address any of the points raised in the letter, but does offer some hope for transferring the Helmshore and Queen Street textile museums into community hands. However, the timescale envisioned by the Council still seems to be this April, which is unrealistic in terms of developing a financially credible business plan (see response letter below). 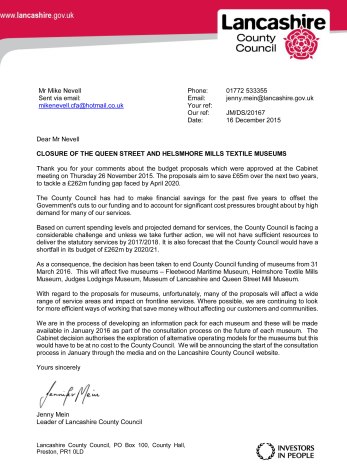 The financial pressures on volunteer-run museums has been highlighted just yesterday (7 January 2016) by the announcement of the sudden closure of the Haigh Pit mining museum in Cumbria. This is despite a large HLF grant to help revamp the visitor facilities (only opened last year). Hopefully the closure will be temporary. The best we say about the current situation in Lancashire is that the Council is willing to engage in dialogue and to at least hear about proposals to secure the future of these nationally important museums.

Those interested in a future for Lancashire’ past may yet have to follow the example of the Leicestershire campaigners fighting to save the Snibston Colliery site and the Old Oswestry campaigners in Shropshire in more direct action.

YET, the same Council seems to have closed its eyes and ears to the looming disaster of shutting its archaeological planning advisory service and the HER. As I stated in my letter on behalf of CBA North West in November 2015, access and maintenance of an HER is NOT a discretionary service.

This is, in my view, a far more serious issue than the threat to the museums. This is because we wont know what archaeological evidence will be lost – we can at least quantify the damage if the Helmshore and Queen Street museums are closed.  The loss of potential archaeological material if this archaeological service is not replaced will impoverish the future of all Lancashire citizens. Furthermore, it tacitly condones the loss of our archaeological heritage, with no controls over the discovery, removal or sale of any objects uncovered.

If the HER is closed how long will it be before nationally important objects such as the Silverdale Viking Hoard or the Roman cavalry tombstone found in Lancaster surface as part of the illegal international trade in antiquities? Such an approach by the Council strikes me as coming very close to approving the looting of the past.