Lancashire’s Archaeology is on a countdown to destruction, with the 29th January 2016 the next fateful date in a slide towards the wilful obliteration of the county’s heritage. Why? Well you could look at this petiton here:

To explain: in November 2015 I wrote, in my capacity as Chair of CBA North West, two letters to the leader of Lancashire County Council about their proposed heritage cuts: one concerning the closure of five museums and one concerning the closure of the Historic Environment Record (HER) and the associated archaeological planning advisory service. This was to ensure a specific response concerning the HER, the proposed closure of which as I feared in November, has been overshadowed by the angry response to the thought of closing two internationally important museums (Helmshore and Queen Street) and three regionally important ones. I recieved an answer concerning the future of the museums just before Christmas: not encouraging but not wholely without hope (see my blog post earlier this month). Perhaps predictably there was silence about the future of the HER until the last day of the public online consultation (18th January 2016). That response can be seen on this blog. 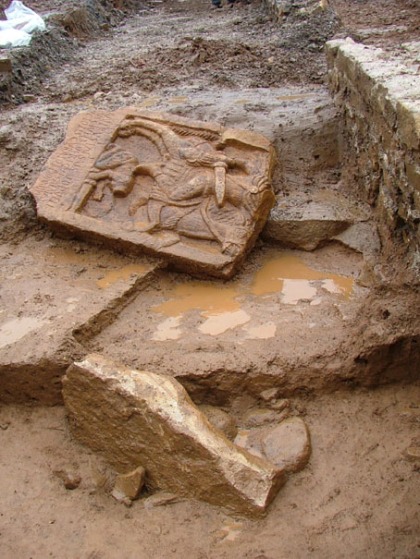 The Lancaster Roman cavalry tombstone shortly after discovery. Without planning archaeology conditions this would have been lost.

Before commenting further I should point out that the delivery of the planning archaeological advisory service in Lancashire has been made more difficult in the last decade by the two-tier local government system: the county council providing key services to 14 smaller local authorities. There has been a gradual erosion of the willingness of local councils to pay for the services on offer, including archaeological planning advice and the HER, and a growing willingness to consider opting out. This has left a gap in taking the responsibility of provision which the current County Council proposals exploit. If voted through at a meeting on the 29th January responsibility will be left with the small lcoal councils to deliver archaeological advice ahead of and during construction: but without the expert advice and databases available through the County Council. 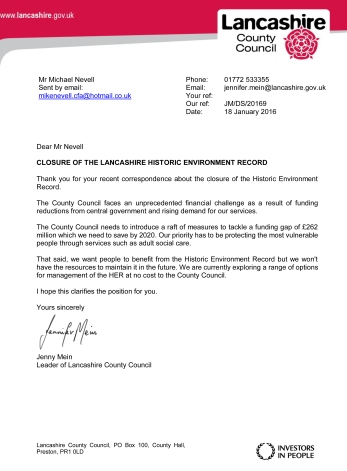 The County Council’s response (right) to this situation is shocking. It is contemptuous of its own expert archaeological staff – Lancashire was the first council to appoint a professional county archaeologist in England in 1963. So to hint that the HER might be delivered at no cost by perhaps volunteers with no planning experience, thus leaving them potentially open to prosecution for bad advice, is insulting and reckless. It is contemptuous of the importance of county’s rich archaeological heritage by implying that it is being asked to put things before people. This is not the case: the Council is rather being asked not to wipe clean the memory of the past generations who have made Lancashire, a memory recorded in the archaeology of the county. Lastly, it is deeply contemptuous of the public response. Clearly, they believe that public attention will be on the musuems not the archaeology. The Council for British Archaeology, Chartered Institute for Archaeologists, RESCUE (the Trust for British Archaeology) and CBA North West believe otherwise and have suggested ways forward, but these need more time than the few weeks given.

One small expression of that desire to be heard, to save the memories of the past, is the online petition: ‘Save Lancashire’s Archaeology from Cuts’ now approaching 800 signatories. Signing this just might help to save Lancashire’s past: