The inner bailey at Halton Castle. The castle was the site of s community and research excavation led by Norton Priory Museum and Salford University in 2015

The Council for British Archaeology’s spring AGM (in 2016 on the 7th May) is a chance to reflect on the past year in archaeology in the North West. Many of the themes are familiar from the last couple of years. Nationally, the big worry in archaeology remains the financing of local authority planning advisory services. Planning archaeology posts continue to be lost, the latest in our region being the closure of the Lancashire archaeological planning advisory service in March 2016. However, we understand that a new out-sourced consultancy service will be replacing this, later in the Spring. Committee members have lobbied councillors in Lancashire over this and the potential closure of six Lancashire museums (including two internationally important industrial museums at Helmshore and Queen Street). The equivalent Cheshire service remains under review, and a report is due out on the future of cultural services (of which this is part) in West Cheshire and Chester Council later this spring.

On a brighter note, an archaeological planning officer for Merseyside was appointed earlier this year. Our parent body, the Council for British Archaeology has weathered its own recent difficulties. National CBA is a significant factor in inspiring the next generation of volunteers and professionals through projects such as the ‘Home Front Legacy’ and the ‘Local Historic Environment Network’. The Council for British Archaeology has supported CBA North West in our lobbying against the closure of the Lancashire archaeological planning advisory service and has been advising us on increasing our advocacy activities.

The pace of developer-funded archaeology in the region has increased significantly. Several major infrastructure projects, the M6-M56 link in Cheshire, the Manchester Airport Relief Road and the Heysham-M6 Link, have produced Bronze Age, Roman and medieval archaeology. There have also been major urban excavations in Chester (behind the market place and in Gorse Stacks), and in Manchester (Ancoatsa nd Angel Meadow) and Salford (Greengate). This is why planning archaeology advisory services are so important in ensuring this archaeology is captured. Eleswhere there have been significant research and community excavations at Halton Castle, Lancaster, Mellor Mill, Poulton, Radcliffe, Ribchester and Salford. Brief descriions of these projects can be found in our newsletter, two of which were published in 2015-16 (back-issues can be downloaded from our website – www.archaeologyuk.org/cbanw/). 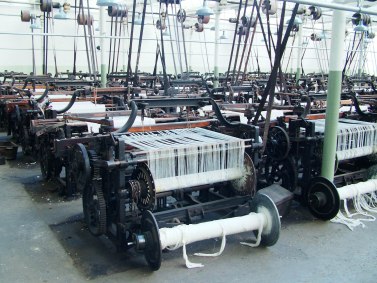 The looms at Queen Street Mill, Burnley. This internationally important textile museum, along with five other museums in Lancashire, was threatened with closure in 2015.

Finally, at this year’s AGM we launched a new grant fund in memory of one of our most active committee members. The ‘Peter Lange Community Archaeology Grant’ is for a single grant of up to £400. Any groups within North West England (Cheshire, Greater Manchester, Lancashire and Merseyside) working on community-focussed archaeology projects are eligible to apply. Applications will be reviewed by the CBA North West committee and the successful recipient will be announced at our autumn conference in November 2016. Over the last 12 years CBA North West has given grants to groups in the region totalling more than £8500, investing in protecting and promoting the region’s archaeology, from Young Archaeologist Clubs to Viking hoards. This is a central part of what the group does: to raise awareness of the importance and value of our archaeology in the North West.