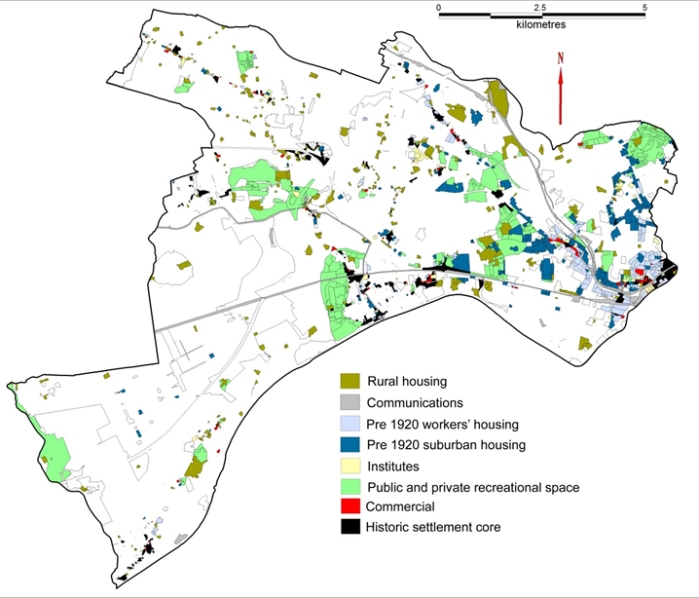 Workers’ housing in Salford in 1850

Thousands of workers’ houses were built to accommodate the city’s working population in the 19th century. The poor quality of those houses and their over-crowded conditions made Salford notorious for its slums.

The types of housing that existed during this period included double-depth terraces, some of which had yards and outshuts to their rear, and smaller back-to-back houses. These were often only a single room wide and deep, with windows limited to the front walls. Many houses were arranged around small alleyways and blind courtyards. The cellars of many properties were also inhabited, providing the cheapest form of accommodation.

The slum clearance of the late 19th century and redevelopment during the 20th century means that there are no surviving examples of these industrial workers’ housing left in Salford. Amongst the last were houses on King Street recorded in 1986 ahead of demolition.  Archaeological excavation, however, can still provide a way to analyse the living conditions of these houses through their surviving physical remains and the material culture left behind by their inhabitants.

Since 2006 several areas in the centre of historic Salford have been excavated but two excavations south of Chapel Street during 2012 and 2013 highlight these poor living conditions. This work was funded by English Cities Fund and managed by Muse Developments ahead of redevelopment.

In the first area, fronting Chapel Street, nine terraced houses were identified all of which were constructed between 1807 and 1813. Initially these had no running water. In the 1820s a small number of back-back-houses were added to the rear. In the mid-19th one of these house was converted into a bakery. When the bakery’s brick oven was excavated it was found that an earth closet toilet lay on the opposite side of the wall in the backyard. This would have been cleared by hand. Drinking water and drains for flushing toilets was only supplied to these houses in the late 19th century.

The second area to be excavated revealed ten back-to-back and cellar dwellings built in the 1820s and demolished in the early 20th century. These lay between Barrow Street and Park Street and included part of Fletcher’s Court. All were built between 1821 and 1824. The courtyard was less than 4m wide and would have received very little natural light. None of these properties ever had running water. Drinking water was provided from two stand pipes at the northern entrance to the court. An alleyway gave access to the south side of the court, passing through a row of cellar dwellings. Earth closets were added to the courtyard in the mid-19th century but would have been emptied by hand. The cellar dwellings, dug to a depth of 2m in the local clay had no drainage. These were all demolished in the 1920s.

One thought on “SEP Part 12: Industrial Workers’ Housing in Salford”