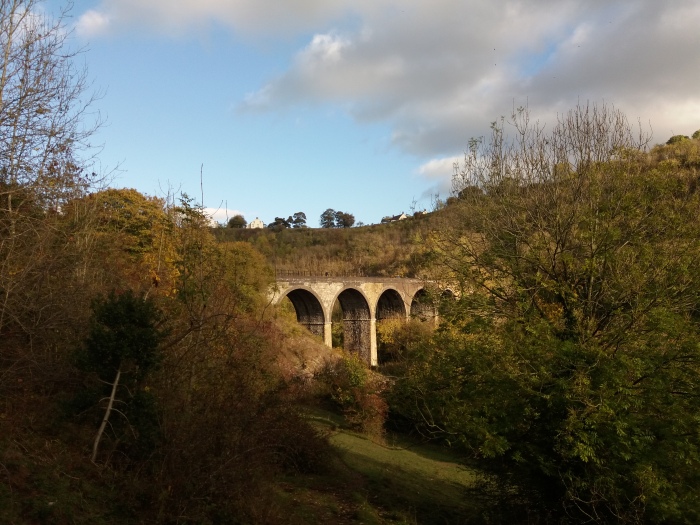 After the hot early and mid-summer weather of 2018 revealed thousands of new archaeological sites through cropmarks and parch marks, the autumnal season provides the opportunity to discover archaeology in a different way. Shallow earthworks emerge in the low rays of late-year’s sun, monuments are illuminated in a glow or structures are revealed as the summer foliage falls. The clear atmosphere and sharp light of this season often highlights both built and earthwork features.

One of my favourite spots for seeing how the changing seasons hide and then reveal the deeper archaeology and history of the landscape is at Monsal Head where more than 3,500 years of archaeology can be seen at the popular beauty spot (see above). The deep river valley of the River Wye is spanned by the five-arched stone viaduct of the former Rowsley to Buxton railway line. The Monsal Dale Viaduct was built in the years 1862 and 1863 as part of the Midland Railway’s line from Derby to Manchester. It was designed by the railway’s chief engineer, William Henry Barlow.  The viaduct was constructed in rubble limestone, with Staffordshire blue brick voussoirs and is 91.4m long, 8.6m wide and consists of five semicircular arches, each of 15.5m span and with a maximum height of 24.4m. Yet the surrounding valley rises more than 30m above the track level.

The line closed in 1968 and the viaduct was listed in 1970. In 1981 a 13.7km stretch of the railway re-opened as a footpath and cycle route between Bakewell and Buxton, although the tunnels on the route were not re-opened until 2011. Just out of sight, on the right-hand side of the above image, is the western end of the 487m long Headstone Tunnel. Bronze barrows can be found on the hilltops along the valley, as well as the Iron Age enclosure known as Fin Cop.

Whilst the railway line, tunnel entrances, and viaducts have now weathered into the rugged landscape of the valley, in the 1860s the art critic John Ruskin denounced the line for its impact on the natural beauty of the Wye Valley. Of course, such linear transport routes through romantic landscapes remain controversial into the 21st century.