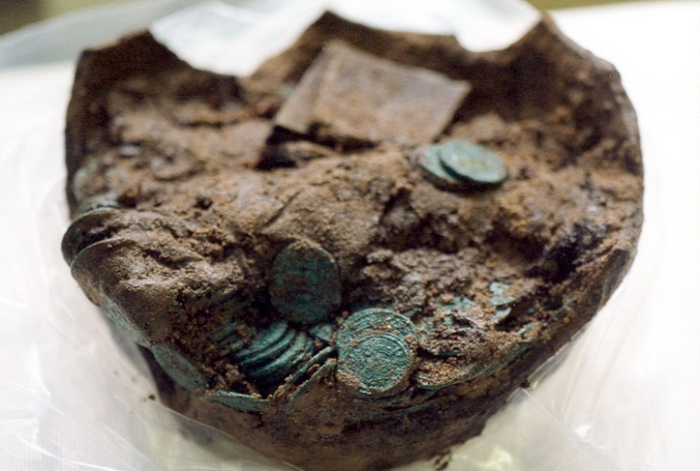 The Pot Shaft coin hoard in the laboratory at Manchester Museum, summer 1995

The sharp light, multi colours, and brisk early morning temperatures of late September I associate with two landscapes – my rambling front garden and the rustles and shadows of Alderley Edge. The Edge has been and is a favourite family walk since I was little, the scene of family picnics on hot summer days and ice creams in December (don’t ask). The long line of sandstone cliffs rise suddenly out of the rolling northern Cheshire farmland and are a dominant feature from the north, though looked at form the south they blend into the eastern Cheshire upland that ultimately becomes the ‘Cheshire Peak’. It’s a landscape steeped in legend and history, with tales of wizards, sleeping kings and buried treasure.

I have been fortunate to have been involved in some of the archaeological fieldwork undertaken at this National Trust landscape from the mid-1990s, both excavation and survey work inside and above the ancient mines. Thanks to the multi-disciplinary Alderley Edge Landscape Project this research has revealed evidence for mining of copper, lead, and cobalt on the Edge spanning the Early Bronze to the early 20th century.
A recent conference opportunity to talk about the archaeological evidence for Roman copper mining was a good excuse to review the current understanding of what we do and don’t know about this period of the Edge’s history. In March 1995 a hoard of 564 Roman coins was found at the top of an old mine shaft on the northern side of Engine Vein – a great gash through the sandstone escarpment that defines the landscape of the Edge. The coins were contained in a courseware pot (probably Severn Valley Ware) which had been broken at the top to allow the coins in. Hidden around two metres below the top of the back-filled shaft these bronze coins produced at mainly four mints (Arles, London, Lyons and Trier) between AD 317 and 336. I was fortunate enough o spend a delightful summer in 1995 excavating the coins form the pot in the conservation laboratory at Manchester Museum, and then the summer of 1996 identifying the conserved coins with numismatist Keith Sugden.

The subsequent field work in October 1997 revealed the remains of a previously unknown square-sectioned shaft, 2m by 2m, cut 11m vertically into the Edge, nicknamed ‘Pot Shaft’. At the bottom was a horizontal level, cut from the bottom of the shaft that ran for 7m to the south, before being truncated by the 19th century workings of Engine Vein. A similar shaft, of which only the two corners and edge remain, can still be seen c. 20m south of Pot Shaft on the opposite side of the opencast element of Engine Vein. 4m from this feature, also on the southern side, is a rock-cut inclined walkway with vertical slots cut into its side, perhaps for a windlass or capstan suggesting that this second entrance was a haulage shaft. Around 20m to the east of Pot Shaft are remains of a third shaft cut into the northern side of Engine Vein (and with the eye of faith perhaps a hint of a second horizontal gallery), truncated by the later opencast workings. 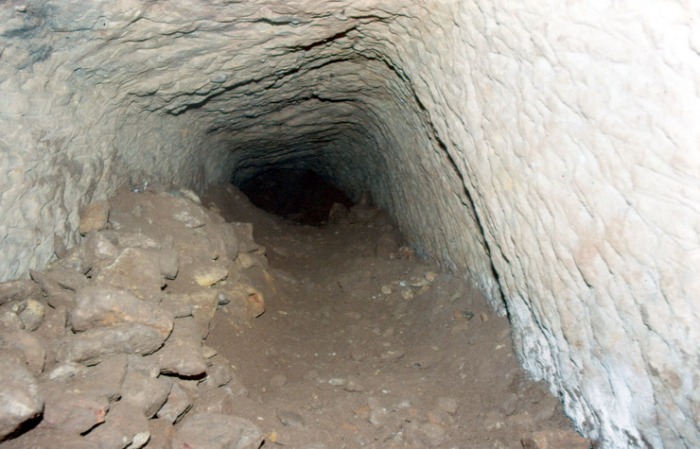 The form and style of this work, including the pick marks, are reminiscent of Roman workings recorded at the Dolaucothi gold mine in south Wales and elsewhere in the Roman world at mines in Spain and beyond. Worked oak wood from the bottom of Pot Shaft produced a single radio-carbon date spanning the years 360 BC to 15 AD. One date is never very satisfactory or accurate, and in the absence of any sapwood from the sample this wood may well have been a piece from deep within the tree, or possibly even a re-used timber.

The implication is that these mine workings are early Roman; the Roman army conquered Cheshire in the AD 60s, which means almost certainly that the mine was controlled by the Roman army. It’s even possible that some of the drift workings elsewhere on the Edge might be evidence for prospection or even opencast working as can be seen in the Mendips in south-west England and around Alston in northern England. The lack of further Roman evidence from Alderley Edge might suggest that the mine workings were worked only briefly. Perhaps the Pot Shaft hoard used a convenient long-abandoned feature on the Edge which was already drifting from memory into legend.

For anyone wanting to delve further into the Edge’s archaeology, fauna, and flora there is comprehensive book edited by John Prag, ‘The Story of Alderley. Living with the Edge (Manchester University Press, 2017). Details of the coin hoard can be found in an article in volume ten of ‘Coinhoards from Roman Britain’, edited by Roger Bland and John Orna-Ornstein (British Museum Press, 1997) and also in the archaeological report for the first part of the project (Timberlake S & Prag A J N W, 2005, ‘The Archaeology of Alderley Edge: Survey, excavation and experiment in an ancient mining landscape’). Or you might want to walk the Edge and experience its atmosphere for yourself. I’d recommend a late afternoon on a stormy autumn day when the other worldliness of the Edge seems almost palpable.

One thought on “Alderley Edge: Roman Mines and Mysteries”