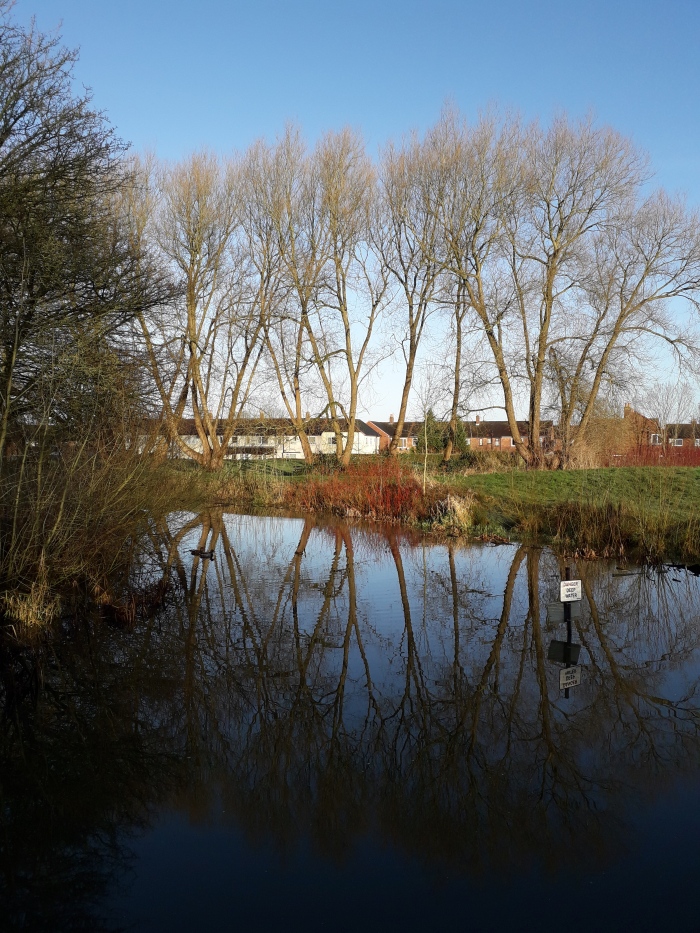 The early morning sun on a crisp January Saturday throws into relief one of the few moated medieval hall sites in the region to still contain water. This is Peel Hall, in Peel Hall Park, Wythenshawe, the site of the first modern archaeological dig to explore a site outside Manchester centre took place in 1981 and 1982. That exploration was led by the newly formed Greater Manchester Archaeological Unit, whose 40th anniversary is this year (2020). The excavations focussed upon the moated platform in response to a proposed scheme of works by Manchester City Council which included clearing the moat and laying out the site of the farmhouse.

By the late medieval period, the fourteenth and fifteenth centuries, what was later to become the city of Manchester had been divided into a network of small manors, each with its own manor house and farmsteads (some even with their own moat, hunting grounds, and corn mills). Most of these later medieval manors and the evidence for the late medieval economy have long since been built over and lost. However, there are some notable survivals within the city boundaries; the timber-framed fourteenth century Baguley Hall, the sixteenth century timber hall at Clayton and several manor sites that have not been built upon and might contain below ground remain, such as the sites of Moston Hall and Peel Hall.

The moated Peel Hall in Wythenshawe originally lay in the manor of Etchells. The Arderne family are recorded as owners of the manor in the fourteenth century and obtained a licence for a chapel at his manor of Etchells, probably at Peel Hall, in 1360. The manor passed to the Stanley family in 1408 and may have been the family seat. From the end of the 1690s the manor house was leased to tenant farmers. Peel Hall was demolished around 1809 and replaced by a T-shaped, brick-built farmhouse of two and three storeys, itself demolished in 1976. All that survives in the twenty-first century is the water-filled noat and the fine seventeenth century bridge giving access to the platform.
Being on council land, Peel Hall was an ideal site to begin investigation into the ancient halls of the county. Subsequently, GMAU established the ‘Country Houses of Greater Manchester’ project in 1982 to better understand the results of the excavations at Peel Hall, and three other hall sites excavated in 1981 and 1982; Denton Hall and Dukinfield Hall in Tameside and Peel Hall in Wigan.

The moated platform at Peel Hall is c. 31m by c. 33m, encompassing an area of roughly 2,700 square meters, surrounded by a water-filled moat c. 10m to c. 16m wide and accessed by a three-arched stone bridge from the seventeenth century. Four trenches, A, B, C, and D, covering an area of 150 square meters were excavated. One was placed in the southwest corner of the platform over the site of the farmhouse demolished in the 1970s (Trench D), a second (Trench A) to the north of this. The other two were located on the eastern side of the platform, to the north and south of the bridge (Trench B and Trench C).

Two successive cobbled surfaces were located in Trench A to the north of the farmhouse, both with a bedding layer of sand. This cobbling coincides with the position of the access road to the farmhouse shown on OS mapping from 1872 onwards. The clay layers found within the trenches, particularly for Trench A and Trench C, points to the clay as representing a capping of the moat platform. This capping covered a possible garden soil and, from the finds in Trench A, seems to have taken place in the nineteenth century and to represent a raising of ground level on the moat platform following the demolition of the hall. The small number of finds, mostly of a late date, were consistent with a large-scale removal of material from the site and suggested this had taken place in the early-nineteenth century when the old hall was demolished and replaced by the farmhouse.

The site of the post-medieval farmstead on the moated platform.

Physical evidence for the medieval hall building is limited to the fragments of grey-green ceramic roof tiles, which are likely to be of a mid- to late-medieval date and imply a building of some local status. The most detailed source of information on the early hall is provided by the probate inventory compiled in January 1665/6 after the death of Katherine Nicholls. Twenty-six rooms are named in total. The inventory goes on to describe the hall and main ground-floor domestic rooms of the house, including the core and the main reception room of the building, the ‘Great Parlour’, the ‘Little Closet on the side of the Parlour’, and the ‘Little Parlour’.

A small community excavation was undertaken in February 2008 as part of the Dig Manchester project. Eight trenches to the east of the moat were dug with members of the South Manchester Archaeology Research Team and the South Trafford Archaeological Group. This work uncovered the remains of several outbuildings, including the remains of a barn and possible shippons/stables dating from the eighteenth and early-nineteenth centuries.

The original dig of 1981 to 1982 highlighted the potential for survival of late medieval manor sites within city, especially where these are located in parkland. The parkland at Peel Hall on the crisp Saturday morning I was there was filled with dazzling low winter sun. The frosted grass blades looked like cocktail sticks and the ice particles on the bridge parapet glistened like gold. Scrambling down the bank by the moat to get a better shot of the platform across the water was a tricky and slippery undertaking – perhaps not the most sensible thing to be doing in the depths of winter but necessary if I was to capture an image for my latest book.