The final aspects of Roman Salford that I want to discuss, in my occasional blog series on the city’s archaeology, are several discoveries around the large wetland area of Chat Moss.

The first two discoveries are linked, at least in landscape position and perhaps in purpose. These are two coin hoards that were discovered close to the line of the Manchester–Wigan Roman road in the Boothstown area of the city. They were situated within 1500 metres of each other on a low ridge overlooking the northern side of the wetland known as Chat Moss. This is an area that is still partially rural and it’s possible to walk part of the Roman road alignment with a hint of what the area might have looked like in the Roman period.

The excavation of the Boothsbank coin hoard in 1989

The first find to be located was the Boothstown hoard, uncovered in 1947 by workmen digging next to tree. They revealed two pots containing 540 coins. These bronze radiate coins covered the period AD 259 to AD 278 and were minted for the father and son emperors Tetricus I and Tetricus II of the breakaway Gallic Empire. 1500m to the east in 1989 ground levelling for house building uncovered a single pot. The single pot lay immediately west of Boothsbank Farm and contained around 1070 bronze radiate coins. This second hoard included coins from the reign of the emperor Trebonianus Gallus (c. AD 238) to that of Aurelian (c. AD 274-82). The burial of both hoards may be a reflection of the economic uncertainty caused by inflation and the political dislocation that resulted from barbarian invasions across the western Roman Empire during the mid-3rd century. The contemporary value of these hoards perhaps amounted to several months’ average wages and no doubt the hiders expected to return. 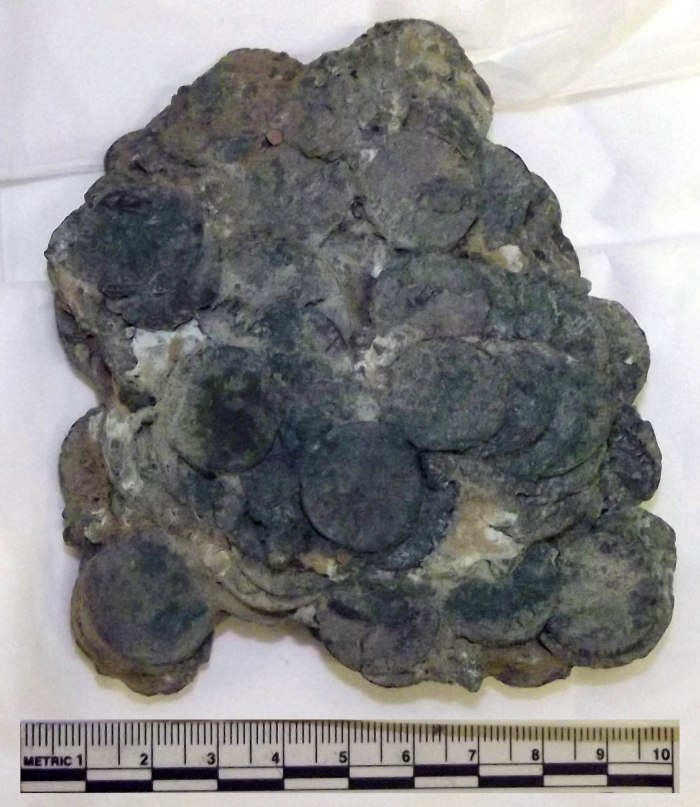 The largest lump from the Boothsbank coin hoard

Another find located not far from mossland was discovered in 2015. This is a copper alloy spoon, possibly part of a manicure set, found close to Barton Moss. The broken spoon or scoop dates to the period AD 200 to AD 410. Such a personal item suggests it might have been lost by someone living locally.

The final item brings us face-to-face with Salford’s Roman inhabitants. In 1958 a human skull with neck vertebrae, was found whilst peat digging at the Worsley end of Chat Moss. Nicknamed ‘Worsley Man’, the surviving skin on the skull showed evidence of a possible garrotte injury on the neck. It has been radiocarbon-dated to the period AD 66 to AD 400. The find parallels the earlier bog bodies from Lindow Moss in northern Cheshire and Ashton Moss in Tameside, and might be part of a possible tradition of late-prehistoric and early Roman ritualised ‘bog body’ killings in Britain and Ireland.

Worsley Man is a reminder that whilst the communities of Roman Salford lived within the wider framework of an international empire, that didn’t mean that they adopted all or even most of the customs and traditions of this imposed culture.