Worsley New Hall during the community excavation in 2012 with the hexagonal fountain base to the left (and holding water). Image courtesy of Suave Air Photos.

The news that the RHS is to restore the Victorian gardens at Worsley New Hall is a an exciting prospect, especially as my team from Salford University have spent several years exploring this landscape. Between 2011 and 2015 a three stage archaeology project, funded by the Peel Group and undertaken by the Centre for Applied Archaeology at the University of Salford, was undertaken at the Worsley New Hall site. The New Hall was built for the 1st Earl of Ellesmere between 1840 and 1845. A Gothic-style mansion with formal landscaped gardens it was described in A Guide to Worsley: Historical and Topographical (1870) as ‘comparable with any of the mansions of the nobility in the north of England; it is an ornament to the county in which it stands.’

Francis Egerton was heir to the Bridgewater estate and the Gothic-style mansion and its formal gardens reflected the wealth generated for the estate by the digging of coal in the nearby Worsley mines. Nor was this the first hall on the site; rather it was the third and the second building to be built with the profits of coal. The late medieval and early modern timber-framed old hall still stands on the hill to the north. The New Hall at Worsley replaced the Brick Hall built in the 1760s as the official residence of the 3rd Duke of Bridgewater, of canal fame. This Georgian-style building was located north of what is now Leigh Road, and was pulled down in 1844-5 as the New Hall neared completion. Leigh Road was subsequently moved north and now runs over the site of the Brick Hall.

The New Hall was designed by the architect Edward Blore (1787-1879). Blore was an established country-house architect and Tudor and Elizabethan styles were his speciality. Most of his clients were drawn from the gentry and peerage, and his work included the remodelling of Buckingham Palace in 1831. Worsley New Hall cost just under £100,000 to build – the equivalent of around £6.7 million today – and was one of Blore’s biggest houses. The grandeur of the New Hall was matched by its gardens. These were laid out in the early 1840s and developed and enhanced over a period of 50 years. William Andrews Nesfield (1794-1881) was involved in the development of the gardens from 1846. At the time, Nesfield was the most sought after landscape designer in the country.

By 1857 there were six terraces, separated by stone balustrades and accessed by series of steps and gravel paths. The two upper terraces were designed in Nesfield’s trademark parterre de broderie, intricate patterns based on 17th-century French embroidery designs created using coloured gravels and plantings. Queen Victoria visited the house and it was even featured in an addition of the magazine Country Life.

The archaeological excavations focussed upon the foundations of the hall and the gardens. These revealed the cellar area of the hall, including the remains of its central heating and a later electric lift. Fragments of elaborately decorated window lintels and chimney stacks were a reminder of the gothic style of the hall. One surprise was the discovery of a large retaining wall, added to the front of the house as part of the landscaping. Another was the uncovering of a lower cellar where huge stone arches supported the hall structure. These features were presumably designed to stop the hall slipping down the hill. 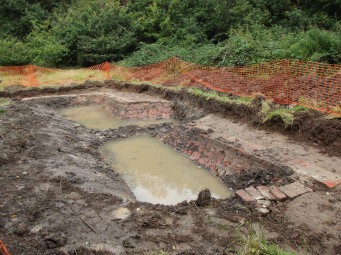 One of the lower fountain bases rediscovered in 2013.

The garden archaeology was designed to look for any surviving evidence for this designed landscape. Initial trial trenching in late 2011 on the top terrace, adjacent to the hall, was disappointing. All that survived of the parterre features were the badly damaged foundation of two footpaths. However, this area had been disturbed during the demolition of the hall. There was, nevertheless, great surprise and excitement when the following year we uncovered the remains of a large fountain on the terrace below the hall. The hexagonal concrete base survived along with the inlet for the water supply. And when it rained it still held water, for the first time since the 1940s. The lower terraces were investigated 18 months later and this time two fountain bases were located, as well as an extensive network of paths and walkways. We may not have located the plants used by Nesfield, but we had revealed the framework for his planting.

These formal gardens had a brief life. After the death of the 3rd Earl of Ellesmere in 1914 ownership of the Hall passed to his eldest son Lieutenant-Colonel John Francis Granville Scrope Egerton, the 4th Earl. However, the Egerton family was never again to live at the New Hall. After use as a hospital in the First World War the intricate parterre planting was abandoned. The hall was used as an army training base in the Second World War, and, by now very run down, was demolished in the late 1940s. The formal gardens were quickly overgrown and lost in woodland. Only the kitchen garden survived. Now this elite Victorian landscape is to be brought back for the benefit of the residents of Salford, and beyond, to enjoy.